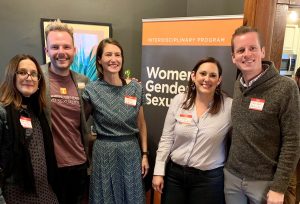 The future of interdisciplinary education in women, gender, and sexuality studies is bright—and growing brighter—at the University of Tennessee, Knoxville. The College of Arts and Sciences’ Interdisciplinary Program in Women, Gender, and Sexuality (WGS) has launched an ambitious new fundraising campaign to enhance and expand undergraduate education in this exciting area of scholarship.

At a small private event for alumni, faculty, staff, and friends of the program, Associate Professor and Chair Patrick Grzanka announced the launch of the campaign. Thanks to initial, foundational gifts from Chad Goldman (’93) and Theresa Lee, dean of the College of Arts and Sciences, the campaign is off to an incredibly successful start. With more than $20,000 raised in one night, the campaign is well on its way toward the ultimate goal of $150,000 raised during the next five years.

Alumna Julie Edwards (’18) spoke about her experiences in the WGS program, which she described as “life-changing.” Andy Renison (’19) also talked about how the WGS faculty and courses were a source of sustaining support during their undergraduate years working as a student activist. Both Julie and Andy were integral members of the student organization Sexual Empowerment and Awareness at Tennessee (SEAT) and both completed the undergraduate major in WGS.

The campaign for WGS will create a travel fund for students to attend professional conferences about WGS issues, including the annual meeting of the National Women’s Studies Association, as well as regional conferences on women’s health, sexuality, and transgender issues. The campaign will also create two new awards: one to recognize outstanding student accomplishments and another to honor faculty members’ contributions to the program. The awards will be named after Rachel Golden, founding chair of WGS and associate professor of musicology, and Cheryl Travis, former chair of Women’s Studies and professor emerita of psychology.

Officially launched in fall 2016, WGS is the campus’s home for critical, interdisciplinary scholarship on issues related to gender, sexuality, and intersecting dimensions of inequality. Students in WGS take courses across the college that challenge them to think about how issues of gender, sexuality, and other dimensions of difference shape human experiences across registers of social life. The WGS Steering Committee consists of nine core faculty representing various areas of the humanities and social sciences, and the broader network of affiliate faculty are drawn from experts across the entire UT campus.

The flagship campus of the University of Tennessee System and partner in the Tennessee Transfer Pathway.